When Harry recognized the predicament he was now in, he turned to the “know it all” friend, Google. Everything Harry found was pointing toward what he already thought: Siamese cats are a “nuclear” option against mice. Harry Googled, “nuclear option.” Google returned “the most drastic or extreme response possible to a particular situation” (Oxford Languages). Well, Harry thought, there must be something wrong with Pickles, or maybe there is something different about my mice, or…. Maybe I should ask Physicus, my very smart neighbor.

Harry’s neighbor, Physicus, taught research to doctoral students at the local university. Whenever Harry would ask Physicus a question, the neighbor would take a quick pause and then reply, “Well, it depends.” For Physicus, there was always more than one answer to any question.

Physicus met Harry in his pajamas with a cup of coffee and something rolled in a Dunkin’ Donuts napkin. Physicus gestured, “Please, Harry, come in.  Have a cup of coffee and a pumpkin Munchkin. I have some super sharp cheese for you, too. What’s up?”

“My cat, Pickles, does not catch mice, and the mice ate my favorite cheese again,” replied Harry, “And Pickles is a Siamese!”

“Really?” Physicus sounded excited, “So, why do you think Pickles doesn’t catch mice?”

Harry looked right into Physicus’ eyes and replied, “I guess… it depends.” Since this was Physicus’ answer to any question, Harry wanted to entice his help using his own words. The strategy worked! Physicus grabbed his laptop and pressed the power button.

“I have already searched Google about my problem with Pickles,” said Harry.

“Oh, your good friend Google,” Physicus mumbled, “Let us see what science tells us about your cat!”

Harry recognizes that there is no available answer for explaining why Pickles is not catching the mice. Let’s consider some of the facts. Cats catch mice. Siamese cats were bred to catch mice and have done it for centuries. Pickles is distinctly Siamese and there are plenty of mice.  What is known about Siamese cats suggests this situation should not be a problem. Systematically reviewing the problem helps to determine the objective facts about it, possible ways to understand it, and possible avenues to solve it.

The Background narrative details the context of the problem. The context is important in determining later components of the research project. As in writing a fictional story, “setting the stage” is a key element in the research story too. The context includes the educational setting, characters, and circumstances surrounding the problem. The educational setting explains the institution, e.g., community college, elementary school, alternative school, corporation, etc. The setting also details where the problem is occurring, such as in a chemistry classroom, throughout a district, or in online corporate training sessions. The description should be clear and detailed enough that a set designer or prop master could replicate the scene.

Educating elementary children is quite different from educating adults. The roles and perspectives of instructors and administrators vary from each other, as well. Specifics, such as second-graders in a low SES urban elementary school, first-generation Latinx college students, and new building principals in an affluent district, are important because they impact the context of the research story differently.

The last element in the context is a comprehensive description of the circumstances the characters find themselves in at the current time. An explanation of the situation surrounding the research problem provides an “opening scene” for the research story. Details about how and when the problem occurs are part of the description. Consider when the problem occurs, e.g., yearly testing sessions, weekly board meetings, or reading groups. Identify to what extent or frequency the problem is observed, e.g., 90% dropout rate, exhibiting no motivation, or daily disciplinary visits to the principal.

The Background heading appears in Chapter 1 of the thesis, dissertation, and capstone projects. The heading tells the beginning of the story including the setting, characters, rising tension, and conflict. The Background sets up the research story. Your writing should draw the reader into the story, and inspire the reader to join your research journey. 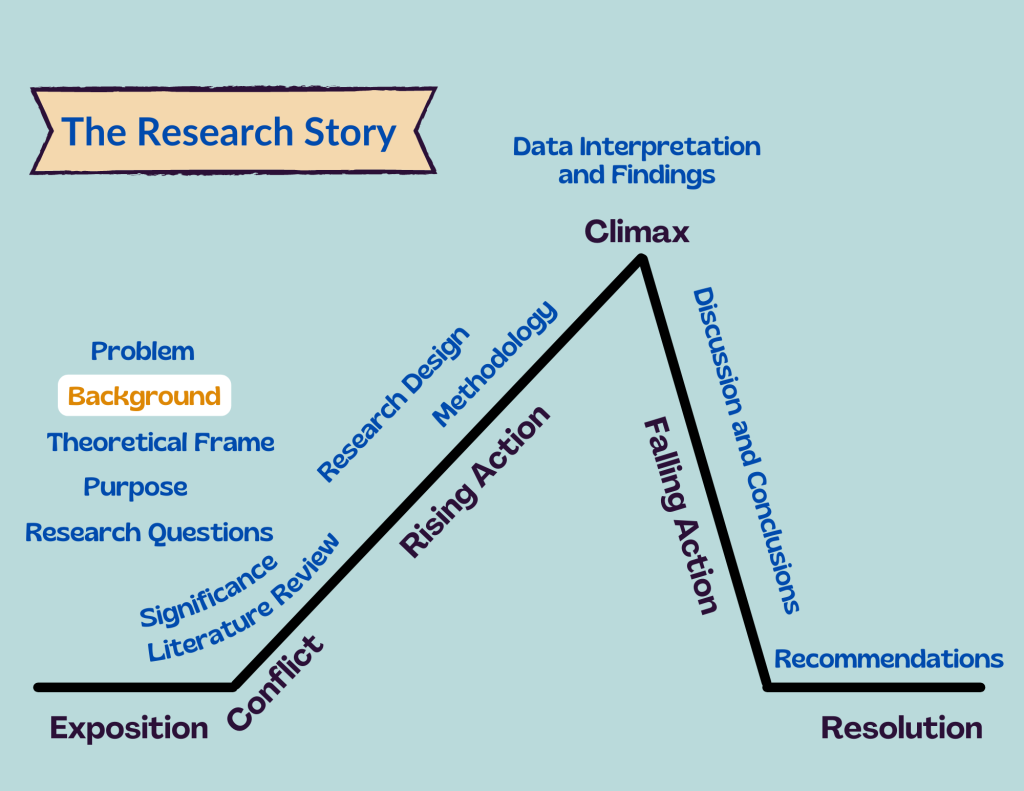