Harry and Physicus spent hours exploring research and finding some fascinating information. Nothing directly explained why a Siamese cat would not have an interest in catching mice. However, Physicus found a study in which researchers concluded that the obesity of small animals was related to their playing and hunting habits. The more overweight the animal, the less they played or hunted.

“This makes sense,” argued Physicus. “When an animal is not hungry, it does not need to be very active in hunting food.”

Another study interestingly connected the number of prey to the lack of engagement in the hunt. Researchers found that a lizard would hunt for a single cricket placed in its cage.  However, the lizard would not hunt any of the crickets when 100 were released simultaneously.  Further, researchers noted when 10 crickets were released into the lizard’s cage, they were immediately hunted and eaten.

Physicus was so excited. “You see,” he exclaimed, “somewhere between 10 and 100 crickets is where the lizard lost interest in the hunt!”

“I wonder if this has anything to do with how Pickles behaves?” Harry said.  Possibilities, but no answers, thought Harry.

Physicus continued, “Now we have two ways we can use to think about the problem. Maybe Pickles is overweight or overwhelmed.”

Physicus and Harry investigated research findings to see what they could learn about the problem. What they discovered were two possible reasons for Pickles’ behavior. This information gave Harry and Physicus two ways to think about the problem. Harry and Physicus will choose one of these ways to provide a direction for exploring published theories that are related to the problem.  The friends will choose one theory as the basis for their inquiry. The chosen theory guides the development of the research project. This is called a Theoretical Framework.

The key concept of the Theoretical Frame is the published theory. However, advanced researchers may base their projects on more than one theory, so you may encounter this when reading published articles. In educational research, theories about learning, development, cognition, psychology, teaching, etc., are used to frame how an educational problem is studied. Examples of published theories are Bandura’s Social Cognitive Theory, Erikson’s Psychosocial Development Theory, Knowles’ Adult Learning Theory, and Skinner’s Theory of Operant Conditioning. The Theoretical Frame is bounded by your chosen, published theory.

A published theory is chosen by how it connects to the research problem. The connection can be found in the Background of the Problem, such as a feature of the setting or participants, or the theory connects to your hypothesis about how to solve the problem. For example, if the problem occurs in a classroom, a social learning theory might be in order; if the problem occurs in a rural school, we might select the psychology of poverty to frame the study. If we hypothesize that professional development (PD) training is needed to solve the research problem, then we would choose an appropriate theory of PD.

The theory provides the parameters for how a research project is developed. The theory acts as guard rails to keep the methodology focused and to ensure the purpose of the study is realized. Different theoretical frameworks for the same problem will yield very different results. Think about the problem of low test scores, as an example. If a social cognitive learning theory (learner-focused) is used to frame a study of low test scores, the project design will be different from the design of a study of low test scores using a professional development theory (teacher-focused).

The writing of the Theoretical Frame includes a full description of the published theory citing the original theorist’s work. The writer must explain why this theory is the best choice to frame your problem. The specific aspects of the theory that relate to your problem are discussed. The discussion details how the theory relates to the background or context of the problem, and how the theory connects to the purpose of the research project.

The Theoretical Frame explains the “point of view” of the research story. It is based on a published theory. In our example problem of low test scores, the point of view was from a social cognitive learning perspective. This point-of-view is focused on how low test scores can be explored by using a student-focused perspective that employs social cognitive strategies.

The elements in this heading can be written in a variety of ways, however, the elements must be there. Often, the Theoretical Frame is written by presenting the theory, how it addresses the problem, and why it is the best choice first. This is followed by how it relates to the background and/or context and then how it connects to the purpose of the study. In other cases, the theory is presented first, followed by how it addresses the problem, is the best choice, relates to the history and current situation, and ends with how the theory supports the purpose of the study. 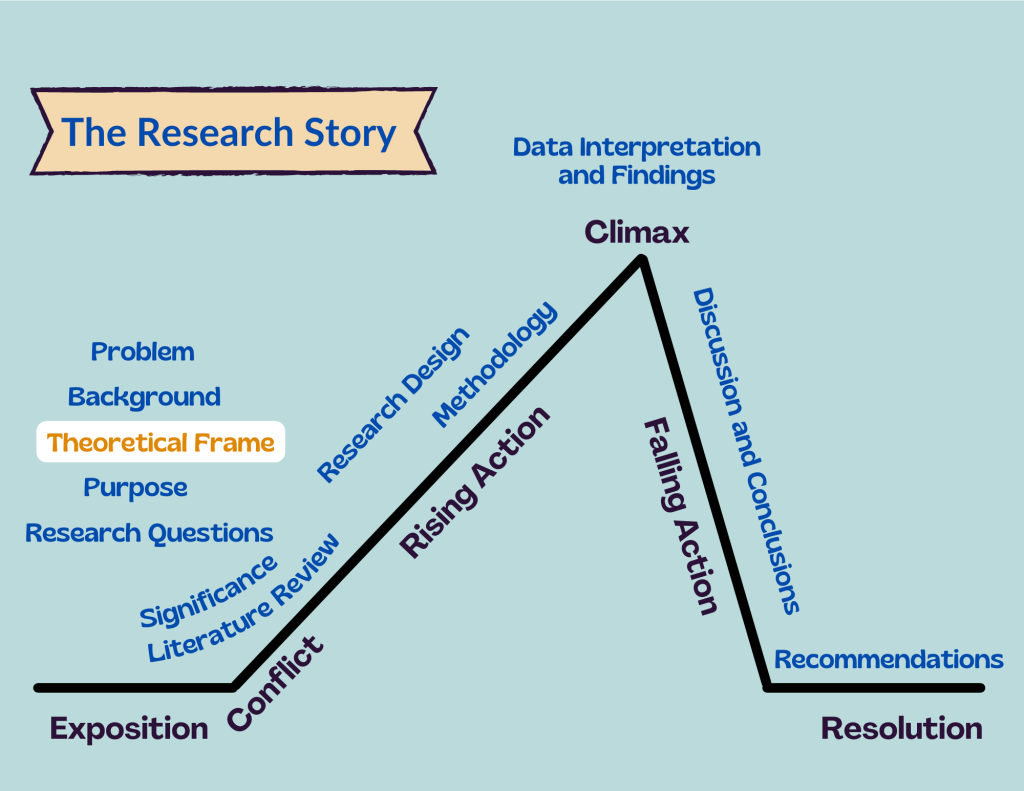