“So, how do we find out the answers to our questions?” asked Harry while Physicus was searching for something on his computer.

“Hmm, hmm, this is interesting… no not this… hmm… what?” asked Physicus. “Oh yes, first we need to ensure that these questions were not answered already by other researchers. We also need to see if our hypothesis about the number of mice influencing Pickles to disengage holds water,” Physicus said.

“What do you mean holds water?” asked Harry. “We found a study about the number of prey affecting how animals hunt,” Harry said.

“We did, but that was only one research article,” Physicus explained. “We need to make sure that this is a strong finding connected to a theory that relates to our project. You see, Harry, since we are going to do all this research, we must be sure that our theory is valid and directly relates. Remember the theoretical frame we discussed?”

“But I thought since we had an article, it was enough,” said Harry.

“Well, Harry, when you did not know why Pickles would not go after the mice, what did you do?” Physicus questioned.

“I went to talk with you,” Harry replied.

“Yes, and what did I do?” asked Physicus.

Physicus smiled. “Yes, and did you search Google before that?”

“I did,” replied Harry, not understanding where this conversation was going.

“You see,” said Physicus, “we had to put together many pieces of information to get the hunch or hypothesis. Now, if we analyze the information formally, we can determine if our choice is the best to frame our research project to solve the problem. Framing our research with a strong theory gives others, who may want to apply our findings, confidence in what we find.”

“But how can we do that? Isn’t it enough to simply explain our thinking?” Harry asked.

Physicus thought a little and then replied, “Harry, if you had any questions about the article we found, can you talk to the author?”

Harry sensed a trick question.  Harry chuckled and said, “As my friend, Physicus says, ‘It depends!’ Maybe the author will not pick up the phone.”

“That’s right. So how do we then learn about the author’s logic in designing the research project that we want to rely on?” Physicus asked.

“I do not know,” answered Harry. 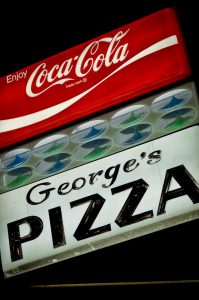 “It is easy,” replied Physicus. “See, research articles have what is called a literature review. This is the section of the article where the author analyzes research findings in the published literature to justify the selection and application of their theory. Analyzing existing research is how we justify our decisions on which theory we will use and how we will investigate our problem. If we want others to benefit from what we learn, we must be able to justify our project!”

Harry and Physicus were hungry, so they ordered a pie from George’s Pizza. Harry exclaimed, “Seriously if you have not had a George’s Pizza, you cannot say that you have ever had a real pizza!”

“I have a theory; a good pizza will put our lit review writing on steroids!” said Physicus.

As Harry learned, there are two reasons for the literature review. First, literature reviews justify the selection of the components for the research project, like the theory in the theoretical frame. Second, it builds the foundation for the argument after the data are collected. The foundation justifies the conclusions based on what is already known. The author presents the cited evidence logically to show how their research project fits into the existing literature.

Literature Reviews identify what is known from published research about a topic. It is a survey of scholarly articles, books, dissertations, conference proceedings, and other relevant resources. Sometimes referred to as “research of research”, the review synthesizes known research findings and facts to provide background information and context for a research project. See Chapter 1 for additional information on the Literature Review.

The writing in the Literature Review:

Conducting passive research using keyword searches on topics, concepts, and theories associated with your research project comes first. This means you will search for research articles, published statistics, etc. through your university or college databases, on Google Scholar, or government sites. Refer to Chapter 2 for details on locating research findings and statistics. Essential information and findings are collected along with the references. The goal is to locate all the relevant and current findings with appropriate background information to write an exhaustive survey of published research. In reality, it will be difficult to truly write an exhaustive review, none the less, this is the goal.

As you read through collected resources, essential information, statistics, and research findings are paraphrased and cited. APA style requires you to avoid direct quotes. It is a good idea to write the cited findings as separate sentences. The cited sentences can then be collected and arranged. You may wish to write each cited sentence on a separate notecard to manipulate manually to organize your findings.

The collected findings, information, and statistics are analyzed and grouped based on a commonality or theme. The common theme is written as a phrase and used as a heading in the Literature Review. The cited sentences are organized logically within the themed headings. Transition sentences and original writing are integrated to expand and connect the ideas into paragraphs.

The themed headings and paragraphs are arranged so that the Literature Review flows logically. Literature Reviews are structured from broad concepts to specific concepts or chronologically from past to present. The heading is written in a way that leads to new understandings of the topic. New insights about the topic are presented through the connections made among the prior research findings.

The Literature Review tells a story of what was known before, what has been found out recently, and where we are currently in the broader story on the issue or topic. The Literature Review works like a montage in a movie to bring the reader up to date with the current story. It first expands the background story, supporting the conflict, and then contributes to the rising action of the story.

The Literature Review is found in Chapter 2 of a thesis, dissertation, and capstone project. A stand-alone literature review functions the same as it does in other research projects. It provides information about what is known about a topic. The heading explains the history, context, and an exhaustive survey of the findings and facts to support the need for conducting the research project. 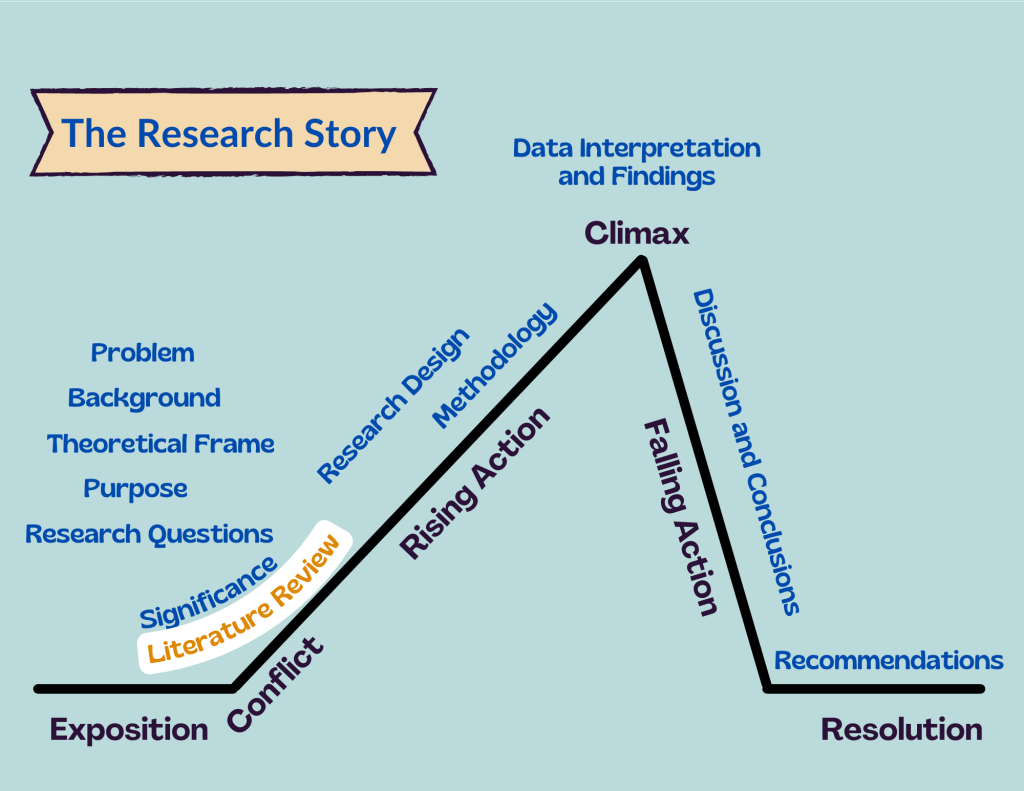