It was so exciting to have the step-by-step recipe for collecting data completed. Harry visualized one day soon when he would find his beloved cheese on the kitchen table untouched by mice. Harry and Physicus went to work observing, counting and collecting data.

After days of experiments, the friends found that when Pickles was in a room with less than four mice, he would charge toward them and catch them all before the mice could escape through a tiny crack in the wall. When there were four mice in the room, Pickles would still attack the mice but only if he had skipped a meal. However, the friends learned that when there were five mice or more in the room, Pickles would hesitate and remain composed, observing the mice but not attacking them.

Physicus questioned Harry, “So what do you think, Harry? What did we learn? What are the facts we now know?”

“Hmm, well, for certain we know Pickles does not catch mice when there are five mice or more in the room because he does not attack. However, when there are fewer than four, Pickles will attack and catch all of the mice. And when he’s hungry he will even catch four mice,” Harry said. “This is good news, right, Physicus?”

“Right, Harry!” said Physicus. “This is good news! The results tell us that as long as Pickles is exposed to three or fewer mice at one time, he should catch them all. We now have information to draw conclusions about how to solve your problem.”

The friends learned the number of mice determined when Pickles would attack. Specifically, they found that when Pickles was exposed to less than four mice, he would catch them all. If Pickles was hungry, he would catch up to four mice in the room. If there were five or more mice in the room, Pickles would not attack at all. The friends have data to support their hypothesis that Pickles becomes overwhelmed with too many mice in the room, causing him not to catch the mice. Harry and Physicus interpreted their findings to mean that if Pickles was exposed to three or fewer mice, he would attack and catch all of the mice. The friends also know that if they want him to attack four mice at once, Pickles had better be hungry!

The Data Interpretation and Findings heading conveys the results and meaning of the data analyses. The writing in the heading reflects specific statements about the outcome of each analysis. It is a report of the results without researcher comments or conclusions. Quantitative analyses are reported numerically, while qualitative analyses are presented in words, phrases, or sentences. The heading includes tables and figures, such as graphs, to convey the results.

The Data Interpretation and Findings heading appears in Chapter 4 of the thesis and dissertation. The heading content is included in Chapter 2 of a capstone project under the heading of Empirical Evidence. The literature review does not have this heading. 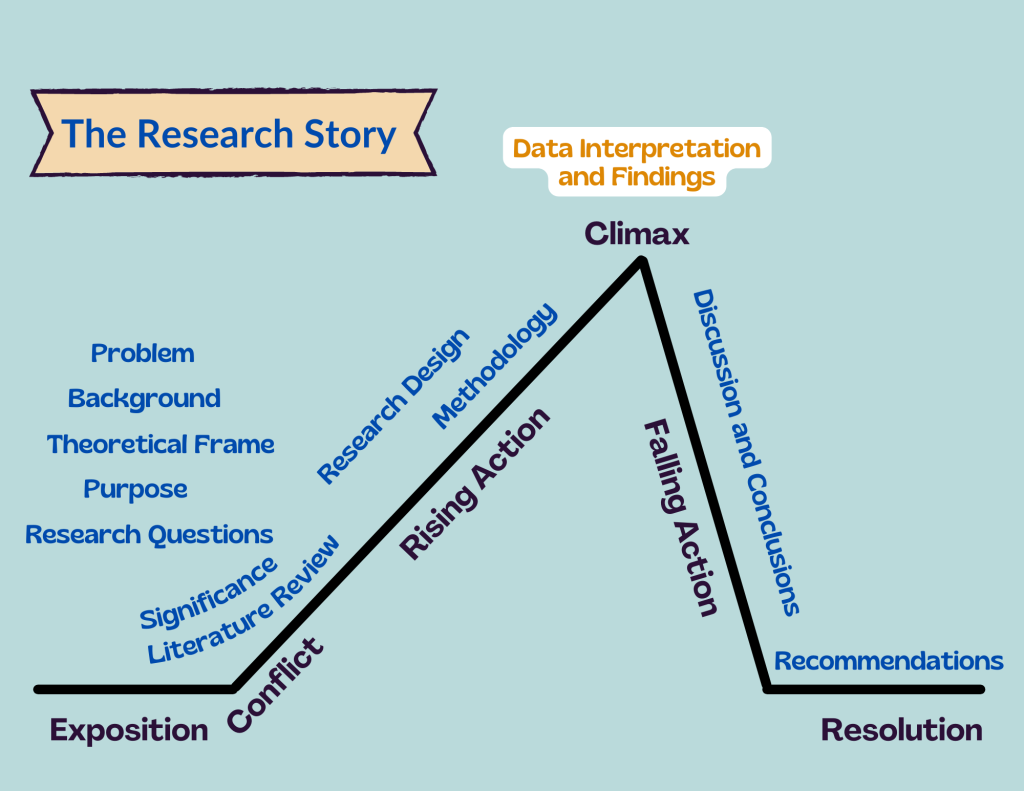