Most research literature includes the same basic components: Problem, Background, Theoretical Frame, Purpose, Literature Review, Methodology, Discussion, and Conclusions. In Part II, we will discuss these components in detail. The components tell a research story. Like all stories, there are characters, setting, plot, conflict, resolution, point of view, and theme. Additionally, the narrative of a story has background or setup, rising tension, a climax, falling tension, and a resolution. While these elements are common, not all stories include all the elements. Some stories have more complex components than others. So it is with research stories, some include all, some have simple components, and others have a more complex structure.

Let’s begin with the story …

Harry had it. The cheese was gone again! Only the torn plastic wrapper with the inscription, “Six weeks in brine and brandy, Époisses de Bourgogne, France,” remained on the floor. This was the smelliest cheese in the world. So much so, no one should ever try to bring it on public transport in France; it is not permissible. Harry loved Époisses cheese. So did the mice that infested his house. Harry did not like mice.

Mourning the loss of his favorite cheese, Harry stood in the middle of the living room, with teary eyes and a trembling voice he screamed loud enough for every mouse in the house to hear.

Well, this is how it all started.

That very night, Harry returned to his home with a new resident, a blue-eyed Siamese cat he adopted from a local pet shelter.  The worker at the shelter told Harry the cat was found locked in a cage, just on the side of a highway, apparently left there to die. Harry felt emotional about the beautiful animal and decided to give him a good life.

When the cat was picked up by the shelter, he was hungry and scared. Two months of the “royal” treatment and dietary fulfillment turned the cat into a perfect ball of fur with healthy deposits of fat here and there. Harry called the cat Pickles.

Now, Pickles’ new house was just perfect, with plenty of room, plenty of love, plenty of food, and plenty of mice. Harry’s home was infested by mice, which was cat heaven, or so he thought. Siamese cats are known for being vicious mice hunters; they were bred to catch mice and other rodents in the Royal Courts of Thailand, after all. The vendetta on mice was official! 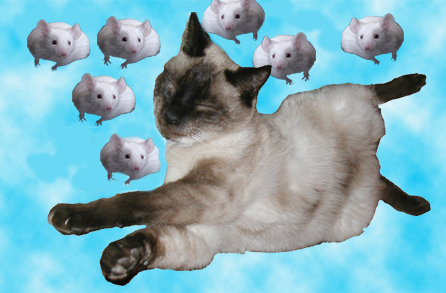