This chapter will overview the writing skills needed for education graduate research. The following is not an exhaustive list of skills instead, these are the most common techniques encountered in graduate research projects. It is a good idea to revisit this chapter throughout the research and writing process.

Writing a research document is different from most other types of writing you have likely encountered in the past. Scholarly writing is expected to be objective in nature. As such, the first-person or second-person voice is rarely acceptable. The use of first-person voice often elicits a perception of bias in the reader. It is very difficult for inexperienced scholars to keep objective, and using the first-person voice increases the possibility of introducing bias. It is wise to keep scholarly writing objective. In recent years, many peer-reviewed qualitative studies written in the first-person voice have emerged.  In such qualitative studies, there is an expectation the writer will be objective in presenting the data analysis and conclusions. Therefore, you may encounter such articles.  However, it is better to write in the third person in a graduate research project.

The content in most headings requires citations to support the writing, much like a lawyer presents evidence to support a case. The support is in the form of statistics or research findings from published articles.

Writing for educational research projects follows the American Psychological Association (APA) standards. Be sure to obtain a copy of the latest edition.  Using an earlier edition of the APA manual will result in considerable errors as each edition has major changes in formatting and style. The APA manual explains writing essentials. The manual details the stylistic, formatting, and citation criteria to effectively develop a strong scholarly work. It is important to read the manual and refer back to it often when writing your research document.

Novice scholars tend to have the same error patterns in their writing. Learning to identify common issues will help develop your effective writing skills. The infographic below describes the top APA issues encountered in scholarly writing. Be mindful of these potential issues in your scholarly writing.

~ Write to the leveled heading

~ Use the highlighting method to keep like concepts together

There are recommended strategies writers use to improve their research writing. One of the primary strategies used in drafting content is called the “highlighting method.” The highlighting method is useful in developing structured and organized paragraphs within the leveled headings. The use of highlighting during the drafting process allows you to check if like concepts are kept together.

In the highlighting method, the keywords or phrases in each sentence of a paragraph are highlighted. The highlighted words are then reviewed from beginning to end in the paragraph to ensure the concepts are the same or closely related. The method can also be used within a heading to ensure that “like” paragraphs are kept together. This helps the author arrange and organize the sentences to flow logically. It also assists in identifying when transition sentences are needed to connect thoughts to increase readability and understanding.

There are several error patterns to avoid in writing research projects. Present and past errors that arise are from inconsistencies of time. For example, “Faculty still debate if the curriculum rigor should be assessed throughout the term ( Author, 1970).” The statement reads as a research finding cited from 1970, but it refers to the present time (“Faculty still debate…”).  The cited finding may have been true at the time of the research, however this does not mean the finding applies to the present time. Instead, your writing should demonstrate how the past finding supports your assertion.

The word choices of an author may contribute to writing ambiguity. Pronouns are vague and should be avoided in scholarly writing. The use of pronouns without a referent in the same sentence is one of the most common errors.  Words such as this, that, these, those, etc. should also have a referent to be clear and understood. The overuse of the word “that” is also a common mistake. Using clear and specific nouns will resolve such issues.

There are stylistic patterns some writers employ that hinder effective scholarly writing. One such style is the play-by-play in which the writing is choppy and has one cited sentence after another. This occurs when the concepts and ideas have not been woven together and synthesized logically. To avoid this ineffective style, use the highlighting method described previously. 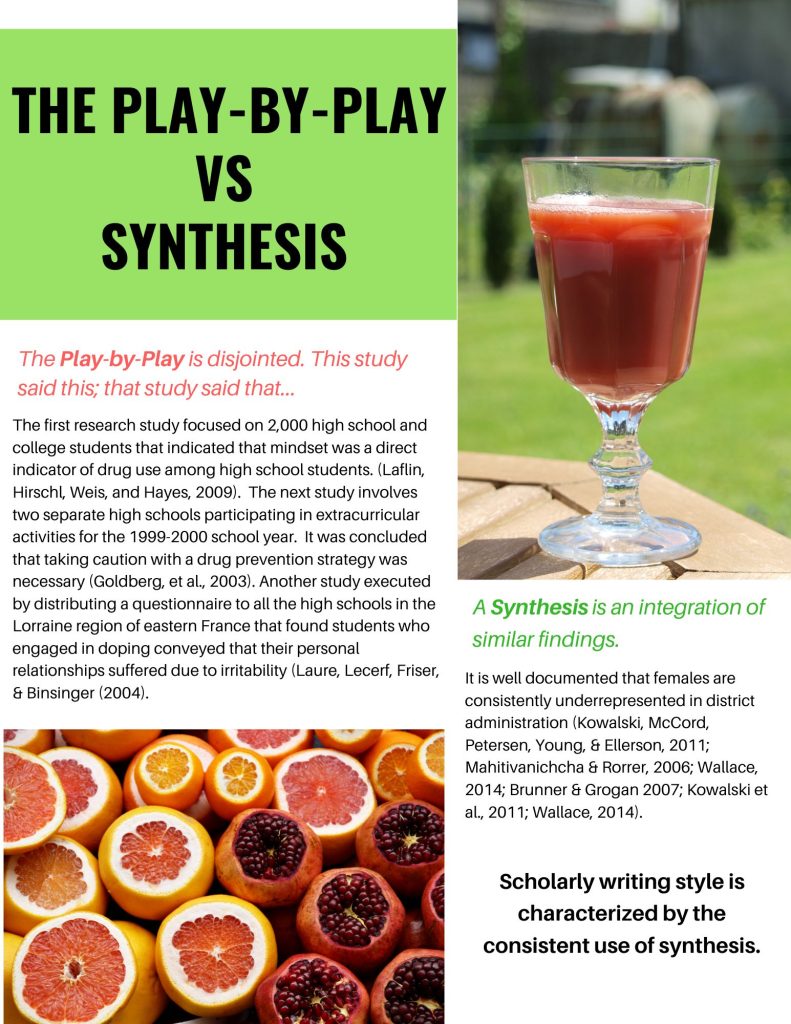 Another common style to avoid is called death by repetition. Death by repetition refers to writing that uses phrases or terms in a repeated fashion that does not add to understanding. This is sometimes known as “fluff.” Scholarly writing is not fluffy. This writing lacks specificity and originality, which can signal the writer is not knowledgeable enough on the topic to explain, detail, and expound the information effectively. The highlighting method help identify repeated phrases. 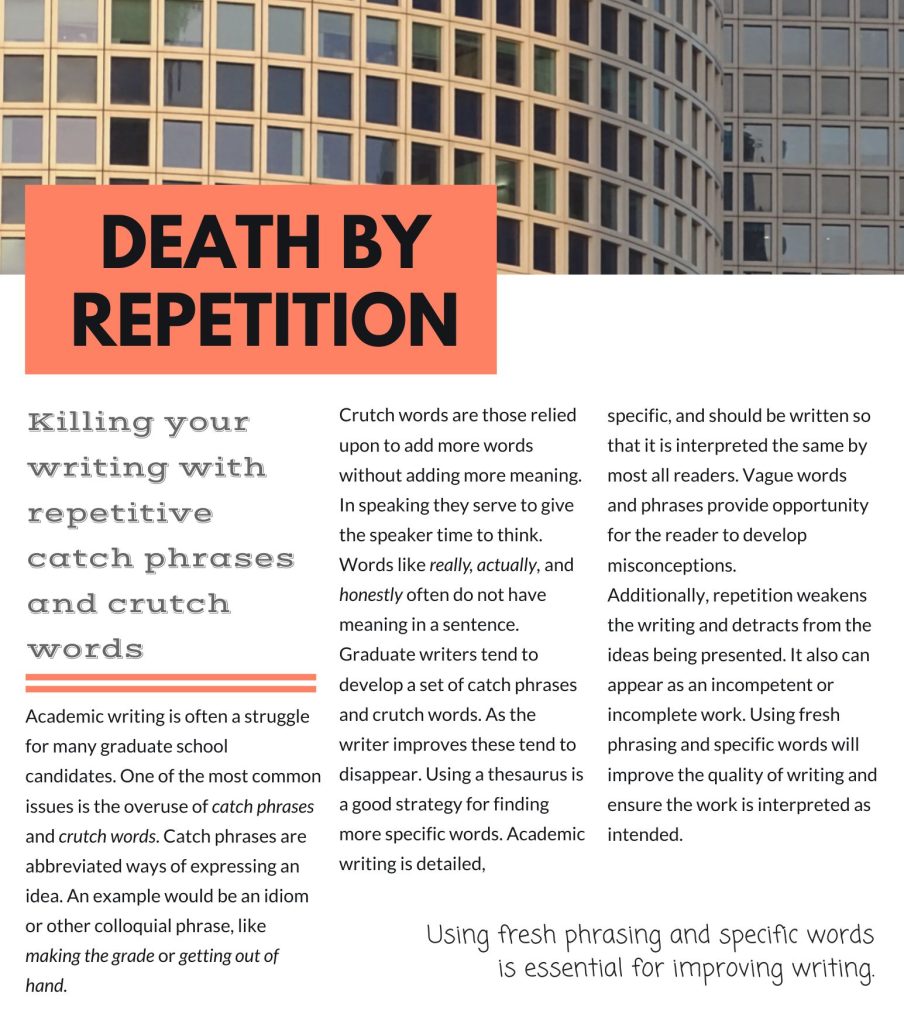