The friends’ theory matched up with what was happening in reality. Pickles could probably take care of three, maybe even four, mice at a time in Harry’s home. Harry is happy that Pickles should finally have fun catching the mice if he does his job of limiting the number of mice Pickles encounters. Harry is also happy he can finally protect his favorite cheese. Yet, for Physicus, a simple application of research findings is only a part of the victory.

While munching on a fresh slice of George’s Pizza, Physicus said, “You know Harry, each research project should not only  contribute toward a solution that can be applied, but it also should provide recommendations for future research.”

“Again Physicus, I do not get what you mean. I am happy now. Pickles caught three mice this morning.” said Harry.

“Your cheese is safe! Terrific! However, we learned that Pickles will catch four mice if he is hungry. What if Pickles were on a special mice-catching diet? This could be an area we explore. We also learned that Pickles is overwhelmed with five or more mice. Would you be interested to know if Pickles would be less overwhelmed if there were a second cat?” Physicus questioned Harry.

“I do not know,” answered Harry. “So far, Pickles is catching the mice, but those are interesting ideas. Perhaps these other methods will get rid of mice even faster!”

“Exactly. Research is how we find strategies to mitigate our problems. More research provides more strategies. We need to share what we learned with other cat owners, but we also need to share our ideas of what to explore next. Then again, maybe, we do some more research on Pickles before we share our findings.” said Physicus.

“I guess it depends!” laughed Harry.

Physicus’ point about providing ideas to explore in research is a very important one. The friends learned some valuable information to share with other cat owners. However, Harry and Physicus also have valuable ideas about other ways their problem can be researched. The friends learned that when Pickles was hungry, he would catch up to four mice at once. The influence of Pickles’ hunger on his behavior is a topic that could be investigated next, like a special diet. Another area to research could be the effect of another cat on Pickles’ mouse catching-behavior.

The Recommendations heading provides the reader with suggestions for the next steps to explore the problem or a related problem. Suggestions for alternative frameworks and methodologies are presented based on the conclusions of your research project. The suggestions are argued and supported by your findings, as well as previously published research documented in your Literature Review.

The Recommendations heading concludes the research story and provides a preview of the next research stories. It tells the reader here’s what was learned in this quest that needs to be explored next. It provides a happy ending, in a sense, because the characters are left hopeful for the next adventure. While this story is over and the problem is resolved, for now, the heading points to the next saga the educational research story.

The Recommendations heading is in Chapter 5 of the thesis and dissertation. The heading content is included in Chapter 3 of a capstone project under the heading of Conclusions. The literature review does not have this heading. 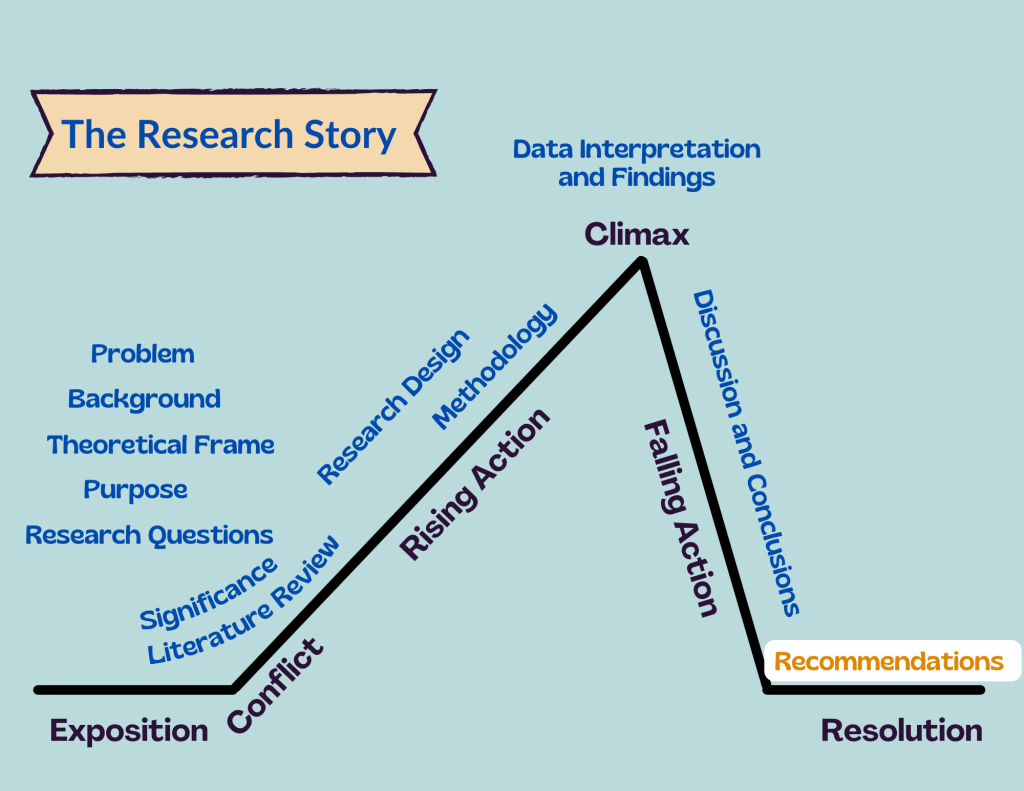