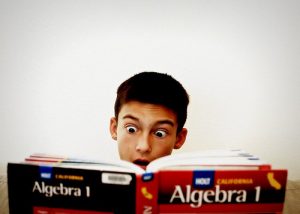 What is algebraic thinking?

As you read the Kansas Mathematics Standards, you will notice the Domain “Operations and Algebraic Thinking” in all grade levels preK grade 12. Furthermore, algebraic thinking and concepts permeate all areas of mathematics. Algebra is more than manipulating symbols or a set of rules, it is a way of thinking.

According to the K-5 Progression on Counting & Cardinality and Operations & Algebraic Thinking (2011), algebraic thinking begins with early counting and telling how many in a group of objects, and builds to addition, subtraction, multiplication, and division. Operations and Algebraic Thinking is about generalizing arithmetic and representing patterns.

Algebraic thinking includes the ability to recognize patterns, represent relationships, make generalizations, and analyze how things change. In the early grades, students notice, describe, and extend patterns; and they generalize about those patterns. Elementary students use patterns in arrays, and they look at patterns to learn basic facts. According to NCTM Past-President Cathy Seeley, “the development of algebraic thinking is a process, not an event. It is something that can be part of a positive, motivating, enriching school mathematics experience” (Seeley, 2004).

Algebra must be incorporated into the elementary classroom as students see patterns, make generalizations, and move across representations. It is essential that algebra instruction focus on sense making, not symbol manipulation (Battista & Brown, 1998). According to Earnest and Balti, “When elementary teachers are unfamiliar with early algebra, lessons designed and labeled as algebraic may become arithmetic exercises; the algebra then remains hidden from both the teacher and students in the implementation. The result is that the algebra standard is only superficially addressed” (Earnest & Balti, 2008).

Blanton and Kaput (2003) suggest teachers “algebrafy” their current curriculum materials and ask students to discover patterns and make conjectures and generalizations, and justify their answers. They also recommend that teachers use these prompts to extend students’ thinking: 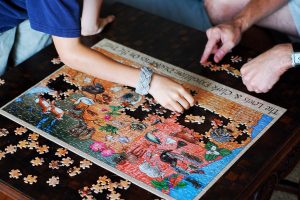 In kindergarten through grade 3, all of the Operation and Algebraic Thinking standards are related to Number and Operations in Base Ten.

Kindergarten students work with numbers through 10 as they solve word problems. Be sure to focus on these three problem types: Result Unknown, Change Unknown, and Start Unknown. See Chapter 4 for more information regarding these types of problems as well as Table 1 in the Appendix of the Kansas Mathematics Standards.

Beginning in kindergarten, students should also see the equal sign as a relational symbol, not as an action to find the answer. Help students see the relationship between both sides of an equation as having the same value.

The Operations and Algebraic Thinking tasks in the Illustrative Mathematics website is a good resource for connecting number sense to algebraic thinking.

All of the second grade standards under the Domain of Operations and Algebraic Thinking were addressed in Chapters 4, 5, and 7 as students represent and solve addition and subtraction problems, use mental strategies to add and subtract within 20, determine even and odd, and use addition to find the total number of objects in a rectangular array.

As students solve one- and two-step problems, expect them to use manipulatives such as base-ten blocks, a number line, hundreds charts, etc. In second grade, do not focus on traditional algorithms or rules, but instead on the meaning of the operations.

Algebraic Thinking and Algebraic Concepts across the Elementary Grades

In kindergarten, students identify, duplicate, and extend simple number patterns in preparation for creating rules that describe relationships (NCTM, 2006). Students in kindergarten see addition and subtraction equations as they decompose a set of objects into two sets. Students decompose numbers 1-10 at this level by using objects or drawings. They should record each decomposition by drawing a picture. If students write an equation, they must also share a pictorial representation or show using manipulatives. Additionally, students use the symbols +, -, and = in their decompositions.

Kindergarten students should have multiple opportunities to use Ten-Frames as they “make ten.” For example, consider the following three ways that students may solve this problem: A package has 10 pencils in it. There are 7 pencils in the package. How many pencils are missing?

First grade students identify, describe, and apply number patterns and properties in order to develop strategies for basic facts (NCTM, 2006). Students in first grade solve addition and subtraction word problems with 20. At this level, do not use letters for the unknown symbols; instead use a box, picture, or a question mark.

In first grade, students are learning to  as they model addition and subtraction with objects, fingers, and drawings. This is foundational to algebraic thinking and problem solving. It is critical that students understand the problem situation and represent the problem.

Check out Greg Tang’s Word Problem Generator here. You can select the operation, the problem type, the unknown variable, and how many problems to generate.

As students solve word problems, it is critical that they not rely on keywords. When students use keywords when solving a problem, they will strip the numbers from the problem and do not consider the context of the problem. In addition, many “keywords” have multiple meanings, such as altogether and left. The use of a keyword strategy does not develop sense-making and does not build structures for more advanced learning. Instead, discuss what the problem is asking and move the question to the beginning of the problem. Act out the problem, and write the corresponding equation.

In second grade, students use number patterns to extend their knowledge of properties (NCTM, 2006). They represent and solve addition and subtraction problems within 100. Continue to expect students to use base-ten blocks, hundreds charts, number lines, drawings, or equations to support their understanding.

Students in second grade are becoming fluent (efficient, accurate, and flexible) as they mentally add and subtract within 20. Give students multiple opportunities to write equations with two equal addends, such as 2 + 2 = 4 or 3 + 3 = 6. This lays the foundation for multiplication.

Third grade students understand the properties of multiplication and see the relationship between multiplication and division (NCTM, 2006). This is a fundamental step in developing algebraic readiness. Students focus on two models of division: and .

In second grade, students used rectangular arrays to find the total number of objects, and wrote equations to represent the sum, such as a 5 x 5 array could be written as 5 + 5 + 5 + 5 + 5 = 25. See the modules at EngageNY for resources teaching algebraic thinking for third grade students. Students use the properties of multiplication (commutative, associate, and distributive properties) as they multiply and divide, and understand part/part/whole relationships as they make the connections between multiplication and division. To develop algebraic thinking and reasoning, students explain an arithmetic pattern using the properties of operations. 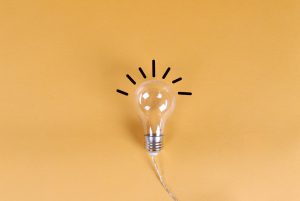 Algebraic thinking is a Domain throughout the mathematics standards. Beginning in kindergarten, students solve addition and subtraction problems by representing them in various ways. Additionally, they learn about basic operations and quantitative relationships as they model problems and look at mathematical properties and relationships (Stramel, 2021). Read more about Operations and Algebraic Thinking in the K-5 Learning Progressions document.

a pattern that changes by the same rate, such as adding or subtracting the same value each time

a problem where you know the total number of groups, and are trying to find the number of items in each group

also called repeated subtraction division, a way of understanding division in which you divide an amount into groups of a given size