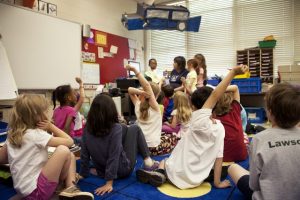 Preschool children are very active, and any program and teacher must take that into account. Emotionally, preschoolers are inquisitive and explorative. Cognitively, they are in the preoperational stage of development in which they begin to engage in symbolic play and learn to manipulate symbols. However, Piaget noted that children at this stage do not yet understand concrete logic. Children at this stage learn through pretend play.

During the first half of the preoperational stage, children are in the “symbolic function substage.” Children at this stage are generally two- to four-years old. They let one object stand in for another and use symbols and signs, such as numbers. They do this through pretend play; therefore, give your preschool children as much time as possible for imaginative play. This then leads to the “intuitive thought substage” in which children are not logical, but think intuitively. Children at this stage ask many questions and are very curious.

Douglas Clements (2001), suggests that we need preschool mathematics for four reasons: 1) Preschoolers experience mathematics at a basic level, and that needs to be improved, 2) Many children, especially those from minority backgrounds or underrepresented groups, have difficulty in school mathematics and therefore preschool teachers should address those equity issues, 3) Preschoolers do possess informal mathematical abilities and use mathematical ideas in real life, and preschool teachers should capitalize on their interests, and 4) brain research has shown that preschoolers’ brains undergo significant development, their experiences and learning affects the structure and organization of their brains, and preschoolers’ brains grow most as a result of complex activities (Clements, 2001).

Mathematics during the preschool years should focus on number, geometry, measurement, algebra and patterns, and problem-solving. At age three, children can hold up a number of fingers to indicate a quantity.

is the ability to say the numbers in order and involves the memorization of numbers; meaningful or is the ability to assign a number to the objects counted. Children at age three can hold up fingers to indicate a quantity and by age four can count to five or ten, and can tell you what comes next. say how many of something there are, such as one, two, three, four, five; and they answer the question “How many?” tell the position of something in the list, such as first, second, third, fourth, fifth, etc.

There are “rules” for writing and saying number words; it is the base-ten number system that we use (10 digits, 0-9) and we place the greater value on the left. For example, three hundred sixty-two is written as 362. According to Seo and Ginsburg (2004), a child’s ability to write and say numbers does not guarantee their application. Just because a child can say numbers does not mean that they know the quantity associated with that number. Therefore, preschool children begin to put their understanding of “one” to use as they “count up” and develop the meaning of adding one more.

Preschool children must develop the concepts of order and seriation. is the ability to count a number of objects once and only once. is the process of putting objects in a series, for example from smallest to largest. Additionally, young children begin to group objects by their characteristics, such as yellow and blue.

Preschool children can use directional words such as “up and down,” and “over and under” as well as comparing words such as “bigger and smaller,” or “longer and shorter.” Additionally, children at ages three to four recognize and name shapes. Naming a shape is mathematics, it is language arts. Mathematics comes in as students recognize and classify the attributes of those shapes. Additionally, students are beginning to compose and decompose shapes. For example, they may be able to make a square with two triangles.

Three-year olds can lay two objects side-by-side and tell which one is longer. By age four, children begin to use non-standard units to measure things. For example, they can tell you how many shoes long a desk is, although they need to use many shoes. They are not yet ready to use one shoe repeatedly.

Children in preschool do not learn to tell time, but they are learning the concept of time. They talk about yesterday, today, and tomorrow.

Problem solving is critical at all levels. Allow students to solve a problem without stepping in too quickly. Children begin to link words and concepts; therefore, teachers can begin to use story problems for teaching mathematics. In kindergarten, the words should be simple and short and by first grade, students begin to write their strategy in the problem-solving process.

Each of these content areas will be further developed in subsequent chapters. 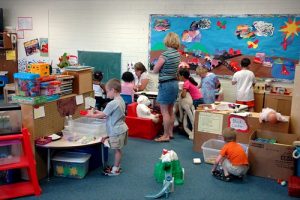 Number sense is the foundation for success in mathematics and is the first vital skill for preschool children (Resilient Educator, 2021). The ability to count accurately is a part of number sense, but also to see the relationship between numbers, such as addition and subtraction. Children should be able to demonstrate simple counting skills before kindergarten. This includes counting to 20, ordering numbers, identifying how many are in a set without counting (subitizing), and understanding that the quantity does not change regardless of the arrangement of the items. Additionally, preschool children should understand cardinality, in which the last number said is the number of items in the set.

Mathematical ideas become “real” when teachers and students use words, pictures, symbols, and objects. Young children are naturally visual and can build those relationships between numbers and the item represented; therefore, teachers must use pictures and objects to clarify that relationship. As children learn to count, they will learn that the number symbol represents the number of items shown.

Patterns are things that repeat in a logical way. Manipulatives can help children sort, count, and see patterns. An AB pattern means that two items alternate, such as red, blue, red, blue, red, etc. ABC patterns means that three items are in the pattern, such as bear, cow, giraffe, bear, cow, giraffe, etc. Students will learn to make predictions about what would come next in a pattern.

Number and Operations in Base 10

Preschool children begin to understand that the number “ten” is made up of “ten ones,” although this is a difficult concept. Teachers should allow children to count on their fingers one to ten.

Showing students the meaning of the words more, less, bigger, smaller, more than, and less than can help young children understand estimation.

Finding length, height, and weight using inches, feet, pounds, or non-standard units is measurement. Also in this skill area is measurement of time. Teachers should ask their students to notice objects in their world and compare them, for example, “The stepstool is bigger than the chair. Do you think it will fit under the chair?”

Sorting is a skill that preschool children should do often. One way to sort is by color; another way is by another attribute. Teachers can ask students to count the toys in a basket, and then sort them based on size, color, or their purpose. Check out this excerpt from the book Exploring Math and Science in Preschool by the National Association for the Education of Young Children – Sorting Activities for Preschoolers by William C. Ritz.

Spatial sense is geometry, but at the preschool level it is the ability to recognize shape, size, space, position, direction, and movement. Teachers can talk with children about shapes – count the sides or describe the shape. Furthermore, talk with children about shapes in their world, such as “The pizza is round,” or “The sandwich is a rectangle.”

Morning calendar time is a daily part of many preschool classrooms. There is a ritual when children sit on the floor and talk about today, look at yesterday, find out about tomorrow, and write out the date. Understanding that time is sequential is critical for young children. They think about before and after, later and earlier, and future and past events. According to Beneke, Ostrosky, and Katz (2008), preschool children generally cannot judge distances or lengths of time. For example, they do not understand that a field trip is in five days and differently than if it is in eight days. And it is different for young children to judge units of time. And although a true understanding of calendar dates comes with maturity, using the calendar to teach other concepts is also valuable time spent in the classroom. For example, vocabulary (month, year, weekend), sequencing (yesterday, today, and tomorrow), and patterns (Monday, Tuesday, Wednesday). They also begin to recognize numbers. Additionally, teachers can use calendar time to teach social skills, colors, letters, and integrate science as they talk about the weather (Beneke, Ostrosky, & Katz, 2008). 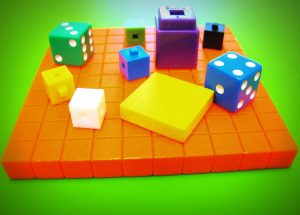 Manipulatives are the mainstay of a preschool mathematics classroom (Geist, 2009). Math  are physical objects that are designed to represent explicitly and concretely mathematical ideas (Moyer, 2001). Students need time to explore and manipulate materials in order to learn the mathematics concept. According to Carol Copple (2004), children should be given many opportunities to manipulate a wide variety of things and teachers should provide children to “mess about.”

Adapted from “The Top 5 Reasons for Using Manipulatives in the Classroom.”

Everyday activities can be used to promote mathematics. For example, during snack time children divide up snacks, count plates, and notice the one-to-one correspondence between the number of children and the number of napkins needed.

the ability to say the numbers in order

the ability to assign a number to the objects counted

say how many of something there are

tell the position of something in the list, such as first, second, third, fourth, fifth, etc

the process of putting objects in a series