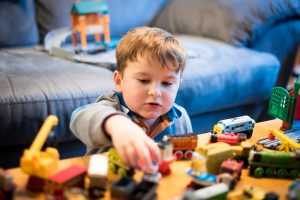 Children grow faster in the first two years of life; more than at any other period of development. During the first two years, the brain grows from 25% of its adult weight to 75% of its final adult weight. Additionally, gross motor skills develop; they use large muscle groups to crawl, sit, stand, and lift things. Fine motor skills develop more slowly: stacking blocks, stringing beads, zipping zippers, and buttoning buttons.

Children are learning about the world around them through experiencing it through sight, smell, sound, touch, and taste. They are also learning by thinking about things, forming hypotheses, testing them, and problem solving. This is Piaget’s sensorimotor stage of development. This stage is from birth to approximately 2 years of age, and is a period of rapid cognitive growth and development.  is the main development during the sensorimotor stage and is vital to mathematics because it is the understanding that an object continues to exist even if it is not seen. According to Geist, “object permanence is the first step toward representation. When a child knows something exists even when he can’t see it, it means he has a mental concept of the object in the absence of its presence. This is one of the bases upon which more advanced mathematics will be built. Numbers are representative of objects and quantities even if we do not see them” (Geist, 2009).

At a very early age, babies use mathematics concepts to make sense of their world. For example, they can signal “more” when they want more food. In addition, they know the difference between familiar and unfamiliar adults which is “sorting and classifying.” They have “spatial reasoning” as they play with boxes of different sizes, and they use “patterns” as they say words and phrases.

As early as 6 months old, children begin to develop an understanding of “more.” They ask for “more milk” or “more food.” Babies from 0-12 months begin to predict the sequence of events, such as running water means bath time, they begin to classify things into certain categories, such as toys that make noise and toys that don’t, and they begin to understand relative size, such as parents are big and babies are small (Morin, 2014).

At 12 to 18 months old, children start to recognize patterns and understand shapes as they play with objects. They begin to sort familiar objects by characteristics, and they enjoy filling and emptying containers. Many children at this age can complete simple puzzles when the puzzle pieces show the whole object.

Although each child progresses at different levels, generally children of 18 months to 24 months old can show “one” and “two” on their fingers. They know some number words. Although they do not understand quantity, they do begin to understand “take one” or “give me one.” Children can match same-sized shapes. Puzzles and toys of squares, triangles, and circles help children develop spatial reasoning.

At 24 to 30 months old, children are learning important mathematical concepts and skills through their play. They recognize patterns and begin to use logical reasoning to solve everyday problems. They can sort shapes and stack blocks by size, and be able to distinguish between “big and small” and “fast and slow.” Children will be able to say some numbers, although they may skip some numbers in the sequence. For example, they may say, “one, two, three, five, ten…” By the age of 3, children should be able to count one to ten. Children at this stage of development generally understand addition and subtraction with the numbers one and two.

At approximately three years old, a child may attend a preschool. But what does mathematics teaching and learning look like in a preschool classroom? All children have the potential to learn mathematics that is challenging and at a high-level (Sarama & Clements, 2009). There is a wide range of development between ages three and five. There will be children who are “almost potty trained” as well as children who have begun learning to read. “Sit-and-listen” approach is only effective if it is highly engaging and exciting, for example, a story being read to the class. Therefore, teaching should consist almost entirely of “active learning.” Teaching should emphasize student-directed/teacher-facilitated activities. Worksheets are inappropriate at this level.

At 3-4 years old, children can count up to 30; and be able to count backwards from ten. Additionally, they can use “first,” “second,” and “third.” At this age, children will be able to use superlatives such as “big, bigger, biggest.” At age 4, children will understand the concept of addition as putting together and subtraction as taking from when objects are in front of them. They also recognize shapes, begin to sort things by color, shape, size, or purpose, understand that numerals stand for numbers, and have the spatial awareness to complete puzzles (Morin, 2014).

At age four, children begin to have in which numbers correspond to specific quantities. For example, a child would point to the number of blocks on the table and say, “1, 2, 3, 4, 5. I have five blocks.”

At age five, children can identify the larger of two numbers and recognize numerals up to 20. They can copy or draw shapes, and understand basic time concepts such as days of the week. By age six, children can add and subtract within ten mentally and solve simple word problems. 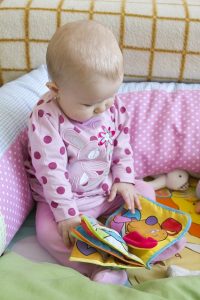 Mathematics is all around us! And we use mathematical language all the time, even without realizing it. For example, when we sort laundry into colors and whites, we are sorting and classifying. Keeping score at a game is number and operations. Spatial relationships occur when we give someone directions, and when we make comparisons such as big and little, that is measurement. Everyday activities include patterns and order. Teachers must make mathematics visible to children through math talks (Greenberg, 2012).

Infants and toddlers understand number and operations as we talk with them about numbers, quantity, and one-to-one correspondence. According to Greenberg (2012), we can say the following to young children:

Infants and toddlers understand geometry by recognizing and naming shapes. According to Greenberg (2012), we can talk with our children about understanding shapes and spatial relationships:

Algebraic thinking begins as children see patterns, relationships, and change as they recognize relationships that make up a pattern or create repetitions. For example, you can say to infants and toddlers:

Data analysis begins as infants and toddlers gather, sort, classify, and analyze information to make sense of their world. Teachers can talk with children about data by saying the following:

Math talks begin as soon as a child is born. During bath time, diaper time, meal time, or on walks or shopping trips is the perfect time to talk about shapes and sizes, talk about patterns, and describe things that are different. Mathematics comprehension is more than just numbers. Math is also about sorting things into categories such as big, bigger, and biggest; solving problems using patterns; solving spatial problems; and using logic.

Read more about Math Talks with infants and toddlers in this article, More, All Gone, Empty, Full: Math Talk Every Day in Every Way.

As children enter kindergarten and first grade, there are many changes in the physical, cognitive, and social-emotional development. Children in kindergarten can sit and attend to a formal lesson for approximately 10 minutes. At this level, the focus of mathematics instruction should be through experiences. By first grade, children can sit for a 15-20 minute formal lesson and although they are developing selective attention (the ability to decide what to attend to and what to ignore), the focus should still be on mathematics teaching through experiences.

Children in kindergarten and first grade are developing their gross and fine motor skills. According to Thelen and Smith, the development of coordination comes from  physical play such as running and jumping and skipping (Thelen & Smith, 1996). Fine motor skills are developed as children write numbers and letters and use a pencil.

Kindergarteners can add by counting on their fingers, and start with six on the other hand; they can copy or draw symmetrical shapes, and can follow multi-step directions using first and next. In first grade, students can predict what comes next in a pattern, know the difference between two- and three-dimensional shapes, count to 100 by ones, twos, fives, and tens, and can write and recognize numbers, and do basic addition and subtraction up to 20 (Morin, 2014).

The Value of Play

Play does not guarantee mathematical development, but it offers rich possibilities. As the teacher, it is up to you to observe and develop a classroom when children have many opportunities to discover mathematical concepts through play. Douglas Clements says, “Anyone who is pushing arithmetic onto preschoolers is wrong. Do not hurry children.” (Clements, 2001, pg. 270). Mathematics should be about joy and challenges, not pressure and compulsion.

For example, children begin to recognize mathematical patterns by listening to music. They naturally make relationships between different-size and different-shaped blocks by sorting. According to Clements (2001), “Good early mathematics is broader and deeper than mere practice in counting and adding. It includes debating which child is bigger and drawing maps to ‘treasure’ buried outside. Quality mathematics instruction includes providing loads of unit blocks, along with loads of time to use them; asking children to get just enough pencils for everyone in the group; and challenging children to estimate and check how many steps are required to walk to the playground.”

Classrooms that offer children opportunities to engage in play-based learning activities help children grow not only academically.  “Play is a particular attitude or approach to materials, behaviors, and ideas and not the materials or activities or ideas themselves; play is a special mode of thinking and doing” (McLane, 2003, p. 11). As discussed in an earlier chapter, there is a strong connection between early mathematics learning and later success. One determining factor of later achievement is quality early mathematical experiences.

Play is critical to a young child’s learning. Mathematics activities must be developmentally appropriate by “integrating logical thinking, decision making comparison, and the making of relationships throughout the child’s day into everything they do” (Geist, 2009). This is the goal of emergent mathematics – to immerse children in mathematics, number, and number concepts. Mathematics at this level must be taught through experiences. Engaging young children in play-based learning, teachers can include the following:

Read the article, “Mathematics in the Preschool” by Douglas H. Clements for more information about quality early mathematical experiences.

Watch the video, “The Decline of Play,” by Peter Gray.

a number that tells the position of something in a list, such as first, second, third, fourth, etc.