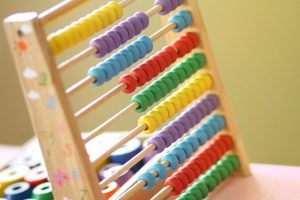 As a teacher of mathematics, remember these fundamental beliefs as you develop early number concepts in your students.

To help children develop early early number concepts, use activities that focus on , , , and .

Watch this video from Graham Fletcher on “The Progression of Early Number & Counting.”

is critical in developing quantitative thinking in young children. A focus on counting in context is one way to build a child’s mathematical abilities, therefore it is critical to count with children every day. Some activities include:

For more activities related to counting, go to the K-5 Counting Center.

Help students see the patterns and make connections. Ask probing questions such as, “How do you know?” and “How did you figure that out?” 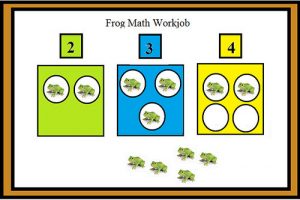 To develop one-to-one correspondence, ask students to match two different types of objects together, such as counting bears and a die that shows five dots. 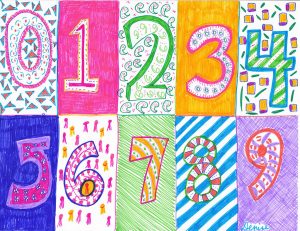 To be successful in mathematics, students must understand by counting various objects and hold that number “in their head.” A child who understands the cardinality concept will count a set once and not need to count it again.

To develop this skill, students need constant repetition of counting and teaching through modeling. Children learn how to count (matching counting words with objects) before they understand that the last word stated in a count indicates the amount of the set. Counting should be reinforced throughout the day, not just during “math time.”

Show students a collection of counters. Ask, “How many are here?” 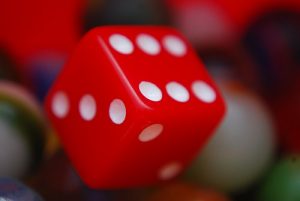 Next in the progression of counting is , the ability to quickly identify the number of items in a group without counting the items. Developing the ability to subitize is critical to the success of early number concepts. Subitizing allows children to see groupings, and these groupings are foundational to addition, subtraction, multiplication and division.

Christina Tondevold (2019) explains: “It’s the same thing when kids are learning to read. When we first teach kids to learn to read, they do it in isolation. C-A-T. And then they put that together to make cat. It’s the same thing as 1, 2, 3, that’s 3. But eventually, we don’t want them saying “C-A-T,” and having to sound it all out the whole way. Like for catnap, you don’t want them to sound out “c-a-t-n-a-p.” You want them to see the chunks. Cat-nap.”

Games are an excellent way to develop subitizing skills in young students; dice, dominoes, playing cards, etc. Watch the subitizing video, as groups of objects quickly flash on the screen.

Hold up a paper plate with dots on it for 3 seconds and say, “How many dots did you see? What does the pattern look like?” Spend time discussing the configuration of the pattern and how many dots are on the plate. Then show the plate again so children can self-check. (Van de Walle, Karp, Bay-Williams, 2019) 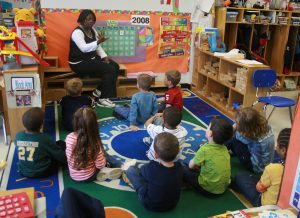 Number sense is defined as a “good intuition about numbers and their relations. It develops gradually as a result of exploring numbers, visualizing them in a variety of contexts, and relating them in ways that are not limited by traditional algorithms” (Howden, 1989). When students consider the context of a problem, look at the numbers in a problem, and make a decision about which strategy would be most efficient in each particular problem, they have number sense. Number sense is the ability to think flexibly between a variety of strategies in context.

Building on subitizing, composing and decomposing numbers, using ten-frames, and the hundreds chart will help develop number sense in your students. When students have number sense, they gain , are  in their thinking, and are able to choose the most efficient strategy to solve a problem.

Number sense is a foundational idea in mathematics; it encourages students to think flexibly and promotes confidence with numbers. According to Marilyn Burns (2007), “students come to understand that numbers are meaningful and outcomes are sensible and expected.” And “just as our understanding of phonemic awareness has revolutionized the teaching of beginning reading, the influence of number sense on early math development and more complex mathematical thinking carries implications for instruction” (Gersten & Chard, 1999).

Number sense is a skill that allows students to work with numbers fluently and efficiently. This includes understanding skills such as quantities, concepts of more and less, symbols represent quantities (8 means the same thing as eight), and making number comparisons (12 is greater than 9, and three is half of six). Students must

Teachers must give students many opportunities to develop number sense through activities with physical objects, such as counters, blocks, or small toys. Most children need that concrete experience of physically manipulating groups of objects. After these essential experiences, a teacher can move to more abstract materials such as dot cards. 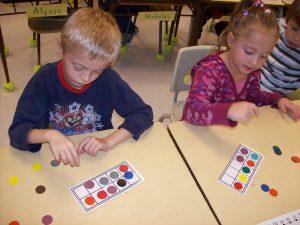 Another way to develop number sense in children is to use ten-frames. A “ten-frame” is a rectangle, separated into two rows, with 10 equal spaces. Here is a blank ten-frame from NRICH.

Ten-frames help students develop number sense, a sense of ten, and learn basic number facts. A ten-frame also gives students a visual of numbers, of composing and decomposing numbers, and is a good way to teach addition and subtraction within 10.

This Ten Frame applet from NCTM Illuminations is a fun way for students to practice counting and addition skills. 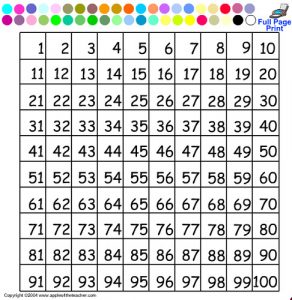 Example #1: Samantha has 4 red marbles and 3 blue stickers. How many stickers does Samantha have?

To use the part-part-whole model, think first about the unknown. Since we want to know how many stickers Samantha has in all, that is the unknown or the “whole.”

Example #2: Addison has 27 chocolate candies. 15 are red, and the rest are green. How many green candies does Addison have?

To use the part-part-whole model, think first about the unknown. Since we want to know how many of Addison’s candies are green, that is the unknown or the “part.”

Basic facts are any number or mathematical fact or idea that is instantly recognizable or retrievable without having to resort to a strategy or a calculation. Just knowing basic facts is not enough. Teachers must help students develop the ability to quickly and accurately understand the relationships between numbers. Students need to make sense of numbers as they find and make strategies for joining and separating quantities.

Students use properties of addition (the  and properties) to add whole numbers. They can then use other strategies such as making tens and near doubles. (Student do not need to know the names of the properties, but they should understand them.) 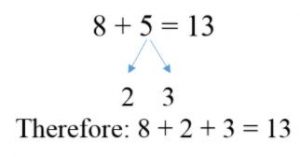 Giving children multiple opportunities to experience early number concepts and number sense is critical for early childhood teachers. Children must experience mathematics through play and manipulatives as they make sense of numbers in their own minds.

the last number word said when counting, tells how many